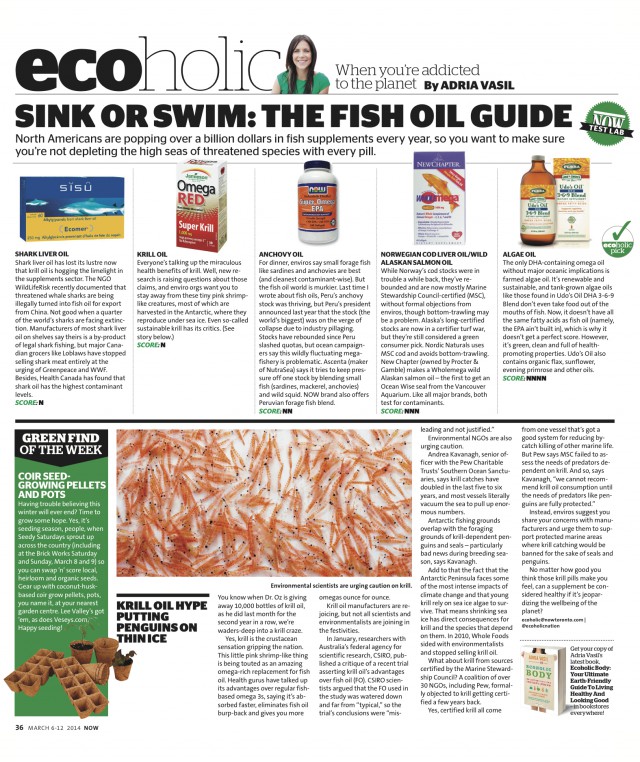 My family pops a lot of supplements. We could probably each start a mini health store with the vitamins cramming our cupboards and counters. And like a lot of North Americans, most of us are taking fish oil. Fish oil has grown to be a billion dollar business on this continent. The question is, which ones are safe, sustainable and healthy? Slippery subject. I’ve written about fish oils in past columns and in Ecoholic Body and I have to say good, green fish oils are a moving target. I’ve always told people to choose supplements from small fish, though in 2010 warned you guys against buying supplements from overfished American menhaden or European anchovies. Small fish tend to be low in contaminants and reproduce quickly. At the time, Peru’s small fish sector seemed to be doing swimmingly well. I started popping Ascenta fish oils (made of Peruvian anchovy, sardines, herring) and recommended the Canadian brand in Ecoholic Body. But the ocean doesn’t stay still for long.

Peru happens to have the world’s largest anchovy fishery, most of that going to fishmeal (feeding industrial cattle, chicken and fish fish farms the world over) and fish oil. After collapsing a couple times in previous decades, Peru’s anchovy fishery was, by all accounts, thriving, on course to get Marine Stewardship Council certified. Then last year, Peru’s president said “The Peruvian anchovy is in danger of disappearing…We recognize the irresponsibility and corruption of large companies 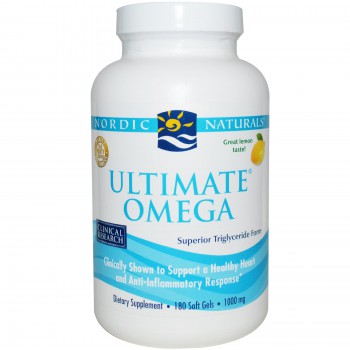 that have pillaged the anchovy.” Then came a federal crackdown, slashes to quotas, introduction of million dollar fines and voila, as of October, the announcement that anchovies had rebounded. Brands using Peruvian anchovy, like Nordic Naturals, maker of the most popular fish oil supplements in America, assured me the dip came from warming El Nino waters, not industry pillaging and shared stats on how stocks were now healthy. Could all be rosy? Greenpeace’s ocean campaign coordinator Sarah King told me not to hold my breath. That these large fishmeal fisheries are too volatile to score favourably.

Turns out Marine Stewardship Council (a certifier that enviros often criticize for being too lax) says Peru still has some work to do beefing up patrols and laying out longer term “harvesting strategies” before MSC will give them the thumbs up. And now weather experts say there’s another El Nino coming in 2014, destined to wreak havoc on Peru’s fishery. Add to that recent news that climate change is going to double extreme El Nino weather events and Peru’s anchovy seem destined for a rollercoaster ride. I hope supplement makers like Ascenta and Nordic Naturals, which pride themselves on sustainability policies, are taking note.

All this to say, there was a lot of back story behind this week’s column that just couldn’t be squeezed into my little product guide (above). No fish oils, in the end, got really high scores. Wild Alaskan salmon oil is still doing well, mostly because it’s not all that wild – the feds actually spawn rivers with salmon eggs to boost stocks.  And Nordic Naturals’ Norwegian cod seems to be relatively in the clear sustainability wise, though fish oils from larger fish are generally higher in trace contaminants, they’re just tested to fall below federal standards, which have their critics. Honestly, I could write a dozen columns on fish oils alone and barely cover the tip of the iceberg but I tried to distill as much as I could into the column you see above. Swim on over to NOW Magazine’s site to read the column there.

As for me, I’m going to finish the Ascenta NutaSea fish oil in my fridge but you can bet I’ll be trying a vegetarian algae oil next.