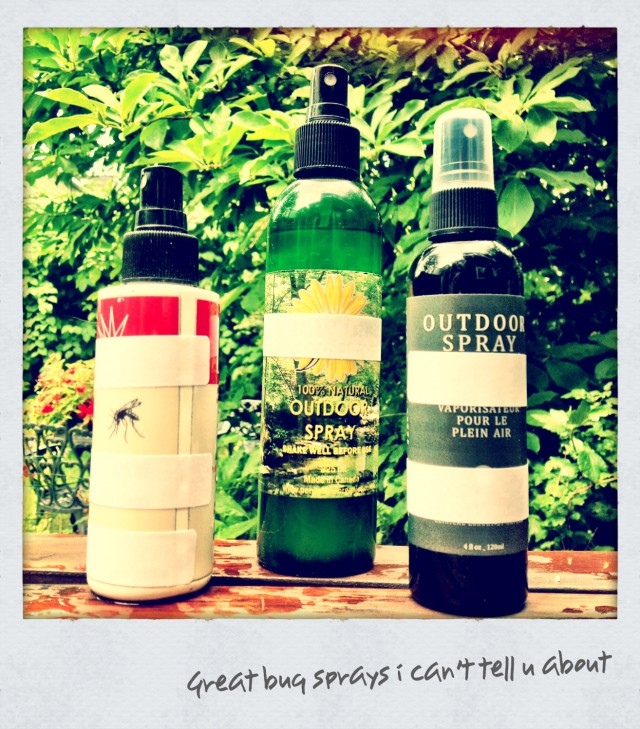 I don’t have to hang around the cast of True Blood to be told I’ve got really tasty blood. Mosquitoes, sand fleas, you  name it, they devour me. I’ve tried a lot of natural bug repellents over the years and was looking forward to sharing some of my faves with you, but then I’d have to kill you – or least write up my reviews in pig Latin so the authorities wouldn’t storm these lovely natural bodycare companies and squash all sales of their repellents. You see, Health Canada and its Pesticide Management Regulatory Agency have gotten their undies in a knot over natural bug sprays that aren’t registered with the PRMA and thus told companies to stop calling themselves bug sprays. Green Beaver, amongst others, complied and checked with HC if they could vaguely call their products “outdoor sprays.” That was kosher for a while. Then after changing their packaging, Green Beaver was later told that outdoor spray labels would have to go, too. Management of the Big Carrot health store near me was told the same thing (though other indy brands told me Health Canada okayed their outdoor spray labelling for now). What’s the big deal? 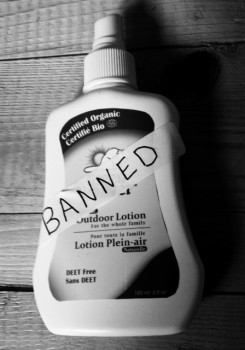 Shouldn’t Health Canada and the PRMA be allowed to make sure that products calling themselves bug sprays in any way prove their efficacy and safety, you ask? Absolutely, but let’s establish an even playing field. Interestingly enough, HC doesn’t ask homeopathics to prove their efficacy before approving them. It also doesn’t stop DEET products from being on shelves even though they can cause rashes and melt plastic. Another interesting factoid, anyone in the country can sell a body oil or a shampoo or a lotion that contains citronella, cedar oil, peppermint oil and all the same ingredients found in natural bug spray formulas, no problem, but if you call it an outdoor spray, watch out. It’s now contraband.

I agree that claims should be proven and unwarranted claims shouldn’t be allowed on products. So yes, ask natural companies to go the University of Guelph and pay for (lower cost) testing to show how well their formulas work against bites if they want to make specific claims about repelling bugs. And if they have to be reapplied every 20 minutes to work, then say so on the bottle. But allow these smaller companies to pool their safety data and trials on ingredients that they happen to share (like say citronella or eucalyptus oil), or else no one can afford the process (see my story Black Bug Down for details – just click on the pic below).  And if you force companies to do that, then please, Health Canada, go after all those bodycare companies in drugstores claiming to be natural or organic, then filling their bottles with all kinds of harmful chemicals and flat out lying through their teeth. In the meantime, leave the outdoor sprays making no claims on their bottles in peace….and click on this week’s Ecoholic column below for reviews of legal bug sprays and lots more…. 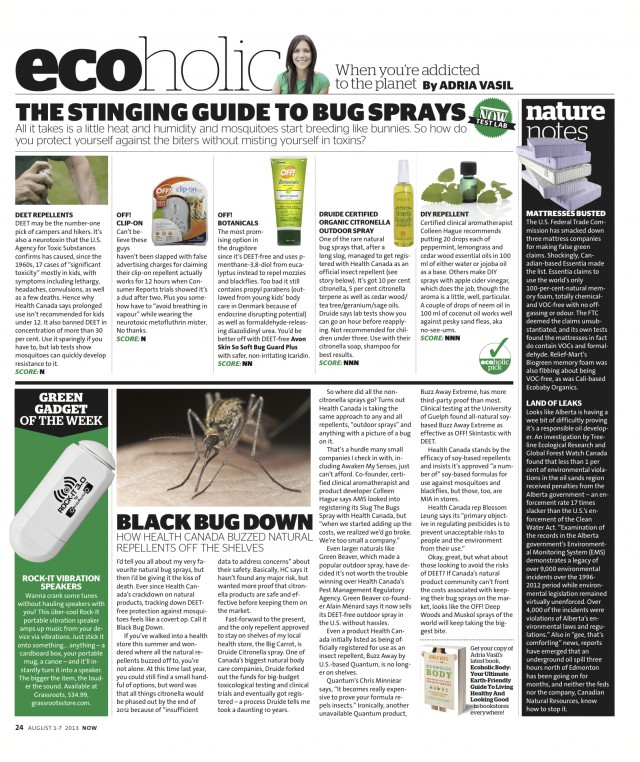