I’m a little suspicious of my plates. The scrapes and scratches on these Kengington Market imports have me wondering whether they’re leaching something dodgy. And yet, I never bothered to buy a lead test until two readers contacted me recently wondering about their ceramics. Then I got to reading. Here’s what Health Canada has to say about lead in dishware:

“For many years, glazes containing lead oxide were used on ceramics when they were manufactured to give these products a smooth, glassy surface free of blemishes. Bright yellow glazes may also contain cadmium. In some glazed ceramics, small amounts of lead and cadmium in the glaze may be released into food. Both lead and cadmium are toxic heavy metals and can cause serious health problems, especially in children.”

Yikes.  Although they kind of make it sound like lead leaching is a thing of the past, that isn’t always the case. Actually, two physicians 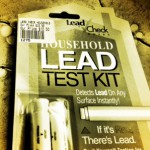 out of Thomas Jefferson University Hospital in Philly decided to test a bunch of dishes from their local Chinatown last year and were pretty shocked by what they found. Of the 87 plates, spoons, cups, etc that they bought at 18 stores and swabbed then with LeadCheck (the same swab I used on my plates), 25% tested lead positive. But as I say in this week’s column on the topic, imports aren’t the only concern.

Now don’t panic and toss your plates on the ground like a Greek wedding guest. The feds say a good lead-free glaze should protect you from what’s inside. If you’re worried about your dishes, I definitely recommend doing your own lead check though. I won’t reveal whether my dishes ended up being tainted – you’ll have to read my column for that!