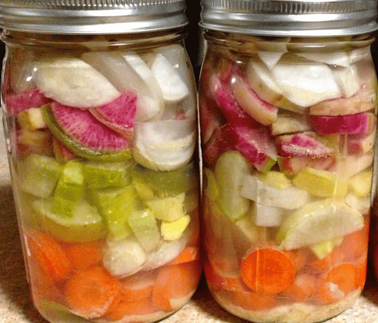 Wedged up in the dark corners of my kitchen, I have colonies multiplying. Not armies of ants or mice, but some sort of offshoot ancient culture of microscopic “mothers.” At least I’m trying to make what’s called mother, I think.

Deciphering the code of food-preservation-speak is actually the hard part. Inviting bacteria to ferment and lightly pickle my fall harvest to last me through the winter is surprisingly easy – as long as you throw away everything Western culture has taught you about sterile living.

I’ve always envied those with shelves overflowing with homemade jarred things. I like cooking from scratch, but sterilizing jars, worrying about estrogenic BPA leaching from lids, and making sure I don’t poison my household with botulism always seem, well, daunting. Until I found my calling in bubbling bacteria.

In search of a culinary kick in the pants, I signed up for a Brick Works Chefs Series class on food-preserving with the Sharkey Pearce brothers of Ursa restaurant. This would be no Betty Crocker jam-making night – Ursa’s touted as one of the best new restos of 2013 and has taken ingredients like kefir and sprouted lentils to mouth-watering heights. Plus, we get to eat our inspiration as we learn. (And drink it, too; biodynamic Southbrook Vineyards is here talking up the joys of fermenting grapes to, er, “preserve” the harvest.)

“Our culture,” says Bill Redelmeier of Southbrook, “has told us culture is bad for us,” Okay, true, we’ve slowly figured out that probiotics are actually essential not just to healthy gut flora but to our whole body’s well-being, so we pop them in everything from yogurt to chewing gum. (Yes, probiotic gum exists.)

But actually growing your own friendly bacterial cultures to extend the shelf life and boost the health-giving properties of food is a whole other level. Yet it turns out it’s a lot simpler than canning stuff.

Sneaking in late, I turn to the woman next to me to find out what I missed, and it takes her a whole six seconds to recap: put radishes in water with 1 per cent salt and let it sit on your counter for a week. “That’s it?” I whisper. “That’s it.”

I’m convinced I must be missing something, but the quick ‘n’ easy recipes keep flying. Sauerkraut? Massage salt into cut cabbage (squeezing out its natural water) and leave in its own briny solution until it tastes, well, krauty. The end.

Crème fraîche? Leave cream at room temperature for a day or two with a dollop of probiotic yogurt mixed in. Preserved lemon? Cut lemon in half, cover it with salt, leave on counter for a week. Really? I call chef Jacob Sharkey Pearce later to double-check the recipe. It gets way more complicated on Google. But he insists that alone will do the trick.

I’ve already called him once after my farmers’ market cauliflower bounced out of my bike basket on my way home. “Can I wash this cauliflower in a veggie wash before I ferment it in saltwater?” He assures me the fermenting will take care of the bad bacteria and that washing it in a produce wash will off the good bacteria you need for preserving. “Don’t be afraid of dirt,” he says.

I feel like I should be paying him for a therapy session. I’m blathering on about my “10-second rule” to prove I’m no dirt-phobe when he says with a chuckle, “Maybe a two-day rule would be too much.”

There’s something wildly renegade about the whole preserving thing. It’s a kind of F-U to Lysol culture, and unlike canning, there’s lots of comfy room for error. Sure, your veggies may get mouldy if they’re sticking out above the salty water, but if that happens, just scrape off the mould and keep on keepin’ on.

“Trust your animal instincts,” we’re told. If it smells bad, don’t eat it. And if your fermenting didn’t go well, try again. We learn how to make our own probiotic-rich kambucha with market-fresh pressed juices, and outrageously delicious cashew cheese with the funky water you get from sprouting things in your kitchen.

We learn about the mother of all fermented yogurt mothers – 1,500-year-old lactobacillis probiotics in Bulgaria – as well as Japan’s history of faithfully stirring your family’s beer/rice bran fermenting juice known as nuka every day for generations.

Not sure I’m ready to commit to something that has to be stirred daily until I die, but my kitchen is now alive with fermenting Indian-spiced carrots, hot ‘n’ sour Romanesco cauliflower, preserving lemons, and there’s some apple kambucha brewing. I’ve even got a jar of hard-boiled eggs sitting on the counter in a little salt, water and spices.

My household should be snacking on this market-fresh goodness long after the autumn fields are blanketed in snow. Now that’s an idea worth preserving.