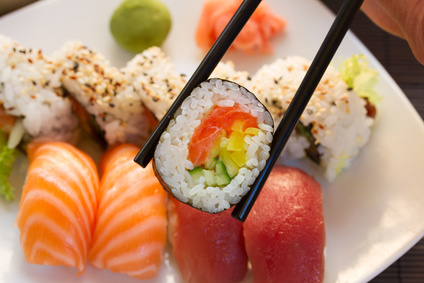 You know the drill. Every week in Ecoholicland readers write in with questions and I answer one in my column. This week’s Ecoholic Q came from a friend that eats more tuna sushi than anyone I’ve ever met. Three times a week (in case you were wondering)! Since she’s in town visiting and asked me which fish she should be eating instead, I thought I’d fast track an answer because, well, it’s urgent. There aren’t plenty more fish in the sea and lots of the ones we’re eating regularly are pretty damn toxic.

So how can we all reduce our toxic load and satiate our appetite for sushi with safe ‘n sustainable choices?

1) Take it easy on the spicy tuna: Poor tuna have it hard. Because of their size (making them higher up on the food chain) they’re some of the highest mercury fish in the sea. They’re also seriously overfished. If you’re going to ignore my warnings and do it anyway, then promise me you won’t a fresh tuna roll more than twice a month, especially if you’re a woman of childbearing years.  And ask for BC albacore tuna if you’re going to get any. Because it’s caught younger/smaller it’s considered lower mercury and gets the green light from Seachoice.org. If your local sushi joint doesn’t carry any, tell them you and your friends would come back more often if they did.

2) Slow down on the salmon sashimi: I’ll admit it, I have a soft spot for raw salmon. Don’t love it cooked, but mm mm raw. The problem is the vast majority of the bright pink salmon in sushi joints is the farmed kind, and the farm kind is an ecological nightmare (for all the deets, go here). Plus the farmed kind are loaded with PCBs, as well as other contaminants including dieldrins, toxaphenes, dioxins and chlorinated pesticides. Ask for wild salmon instead and tell the manager you’d pay a little more for it too.

3) Print off this guide:

There are lots of good guides to sustainable fish. Canada’s Seachoice.org offers a great one for sushi though it focuses on sustainability alone. The good peeps at Environmental Defense Fund (US) address both the sustainability and the pollutants issue by adding a little heart next to greenlit fish that are low in contaminants.  Print your guide out here.

4) Tell your favourite sushi joint to Ocean Wise up! Unless you’re lucky to live in Vancouver, you may have a really tough time finding Canadian sushi joints that offer up Ocean Wise-approved fish. Shame, because there are plenty of other Canadian restaurants serving up Ocean Wise fish. Either way, encourage your neighbourhood sashimi-servers to take the lead, get the ethical edge over their competitors and distinguish themselves from the sea of run of the mill sushi joints by offering up some certified sustainable options. It’s as easy as sending them to oceanwise.ca.