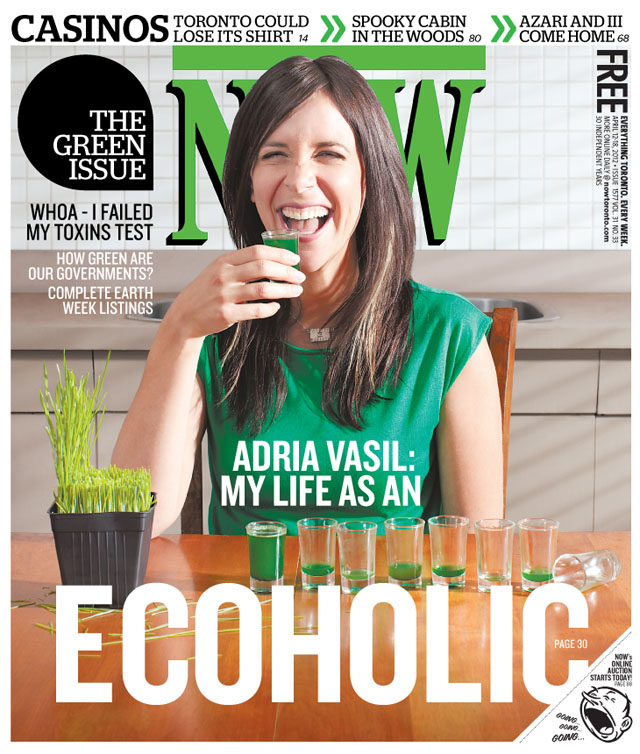 This week was our big Green Issue here at NOW Mag and I’m proud to say I’m on the cover! What a Bizarro World-experience to walk around Toronto and spot your face under people’s coffee mugs on tables — especially when there’s been a moustache graffitied onto it (okay fine, I was the one pencilling the moustache on there, hehe

). If you’re wondering what I was drinking in all those shot glasses, it wasn’t actually straight wheat grass but mostly seaweed juice. Must tastier!  Had a riot shooting it with my friend Dustin Rabin (have you seen this man’s amazing photography? check out his website).

As for my toxins test, I was pretty floored by some of the results, especially since my hair results came in about 5 minutes before my article revisions were due and I hadn’t expected any more baddies to have to be added to the article. When it turned out that I had above average levels of lead and mercury, my jaw hit the ground. I made a few postulations then handed in the piece, but it wasn’t until I called my mom later that day to tell her about my results that she hit the nail on the head: “Shawinigan,” was all she said. That’s the industrial town I had lived in for 5 years as a kid in Quebec. At the time there was all sorts of chemical factories there, including an aluminum refinery not so far from where I went to school. So I started snooping and turns out mercury is a major pollutant of aluminum refining, not to mention the fact mercury pollution was also a factor in 1980s pulp and paper manufacturing. Guess my whole family must have above average levels of the neurotoxin. Wow.

Still haven’t figured out the lead thing though. My mom tells me we had copper pipes growing up so it wasn’t our water, necessarily. I’m still convinced it’s all the cheap street jewellery I bought and chewed on as a teen. Alas, that’ll always remain an unproven theory. Anyway, hope you enjoyed the issue! There’s lots in there besides the toxins test, including my chart on the Hidden Toxins in Everyday Things, a report card on just our governments are fairing in terms of protecting our environmental health and, of course, Andrew’s profile on me. Hope you find it informative! I know I certainly learned a lot about my own toxicity this week. There’s a lot of pollution we can’t control out there in the world, which means we’ve really get a grip on the stuff we can control – and don’t be shy about telling your MP (and all levels of government) to get tough on more toxins!