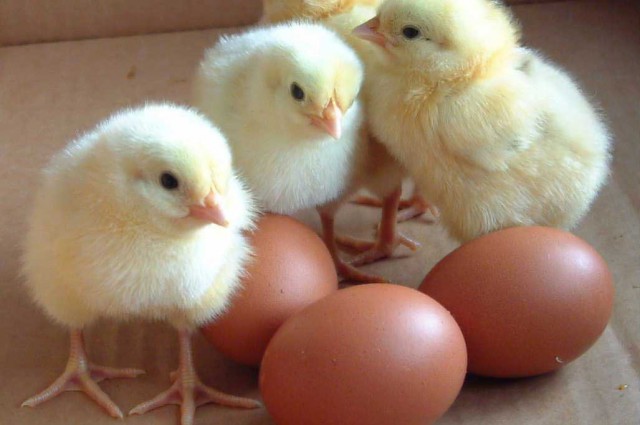 All it took was one beak trimming scene at a hatchery in the movie Baraka to turn me off eating chickens two decades ago. Now 20 years later, I realize the egg business isn’t all it’s cracked up to be either. Vegetarians still eat eggs, since technically they’re not eating meat, but in doing my guide to eggs in the last issue of NOW Magazine, I was pretty shocked to learn that 50% of chicks get offed in the name of eggs. Why? Well, they were born males, so they’re not egg layers and they’re not meat chickens, so they turn into feed for places like mink farms. The big W5 egg factory expose at a Burnbrae supplier in Alberta got everyone talking about some of the inhumane ways caged chickens are treated. The industry, as I explain in my article, tried to make it sound like the egg farms exposed by hidden camera footage were an anomaly, but the truth is even an egg farm run according to the industry’s voluntary code of practice would okay live grinding of male chicks, and it’s perfectly okay to let a caged hen live out her entire life with no more space than the size of a sheet of paper.

At least organic eggs have to meet stricter, more humane standards and the birds are all free-run, technically with access to the outdoors.  Now, does a giant flock actually get to go outside when the pathways outdoors only fit a few birds at a time? Probably not. Not all organic eggs are created equal. Which is why it’s extra important to look for PASTURE-RAISED, ORGANIC eggs. They’re raised the old fashioned the way chickens should be raised. And small flock pastured eggs tend to keep some males roosters around to balance out the social order plus the tiny farms like Nutri Spring don’t worry about having to debeak their hens to keep them from bullying each other.

I used to grumble about the price of organic eggs, but the truth is, if I can’t afford it, I don’t buy eggs. Period. And now I prioritize pasture-raised eggs first and foremost. If you can find some from your local farmers market, even better. Plus, as my vegan readers will point out, there are lots of vegan alternatives to help you avoid eggs altogether. I often sub an egg with 1 tablespoon of ground flax to 3 tablespoon of water or I just throw extra banana in a pancake.

By the way, Mercy for Animals Canada, which shot the hidden camera footage, is trying to get McDonald’s to stop using Burnbrae’s caged eggs. It’s a no-brainer, really. McDonald’s actually championed the cage-free cause in Europe, so why can’t they follow suit here in North America? Tell McDonald’s you won’t buy any Egg McMuffins until they vow to go cage-free on this side of the ocean too. Learn more and sign the petition at EggMcMisery.ca!