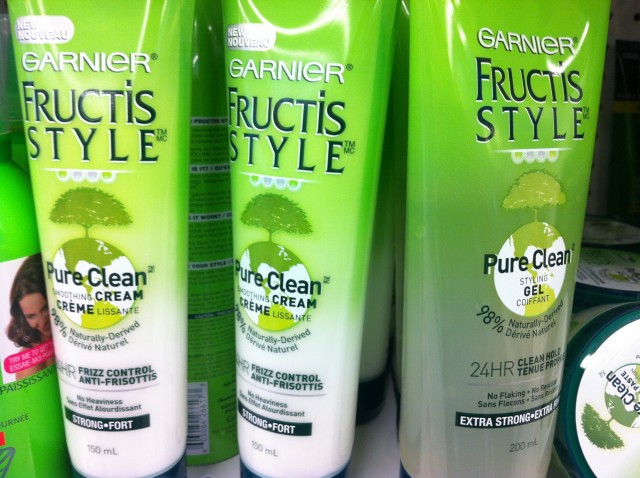 It seems like everyone and his multinational corporate uncle has come out with a green line these days – and Garnier is the newest kid on the eco block with a natural line free of parabens and silicones — Garnier PureClean. Since a lot of you have started asking about it, I decided to do some label snooping to see if their claims hold up.

Claim #1 Biodegradable: So Garnier PureClean’s shampoos and conditioners say they’re 92% or 94% biodegradable. That’s great! …but what about the rest of the product? Does that stay in our waterways for months/years/ever? And who’s certifying these biodegradable claims anyway? Hm, let’s see…no one. There’s no seal on the bottle that tells us, like Nature Clean products, that it’s 99% biodegradable within 28 days according to OECD test #301, or whatnot. If you’ve read my other books, you know it drives me bonkers when companies say a product is biodegradable but don’t cough up any proof, certification, seals, standards or some sort of indication of how on earth this actually breaks down.

Claim #2: 98% Naturally derived: I’m definitely relieved they’re not calling it 98% natural, because that would be misleading. As I say in Ecoholic Body, while this is an unregulated term, the “naturally-derived” label is more accurate than “natural” in most cases since so many plant-based ingredients in a shampoo or whatnot have been lab altered and synthesized. Perfectly fine in many cases, but remember, just because it’s plant based doesn’t mean it’s sustainable (case in point: palm oil–based ingredients), nor does it mean you want it on your skin. Cocamidopropyl betaine (from coconuts) was voted 2004 allergen of the year by the American Contact Dermatitis Society.

Clean #3: Recyclable. Gee whiz, Batman, aren’t virtually all shampoo bottles these days made of PET recyclable plastic? That’s right, Robin, they are. Would have been nice to see some recycled content in that bottle.

Verdict: This product is definitely safer than some other big name shampoos in drugstores, including regular Garnier, and it’s nice that it’s free of parabens, silicones, sodium laureth sulfate and dyes but it doesn’t say anything about its synthetic scent (perfume) being free of hormone disrupting phthalates. Would like to see some third party seals on here proving it’s biodegradable claims.