Most of us, when given a choice, would choose to know when our s@!*’s been messed with. You know, like if you dropped my toothbrush in the toilet when I wasn’t looking, then opted to shake it off and stick it back on the sink without telling me. Or if you spliced a toxin into my corn when I wasn’t around. Hell, yeah, I’d want to know. Polls show 9 out of 10 Canadians agree, supporting mandatory labelling of genetically modified foods.  The issue was a hot topic (or a hot potato, depending on where you stood) a good decade ago then kind of faded away when the feds refused to make GMO labelling mandatory. Well, that’s all turned around now that California’s voting Tuesday November 6 on this very issue (it’s called Prop 37, check out the YouTube video above). Who doesn’t support it? I get into pro-labelling vs anti-labelling brands in this week’s Ecoholic 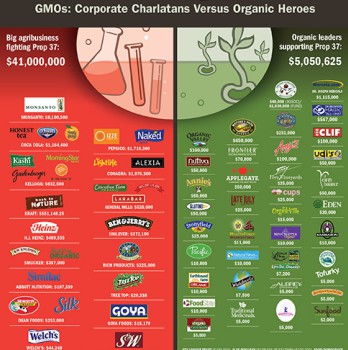 column, which answers a reader question on how you can tell whether your food’s been genetically modified.

By the way, the peeps that outed the brands to the left here (Cornucopia Institute) also outed retailers. Grande soy latte lovers take note, Starbucks contributed a cool $2 million to fuel the anti-labelling ad war. What exactly are you afraid of Starbucks? Your fave soymilk of choice, Silk, says it only uses GMO-free soybeans and has a Non-GMO Project label on it (though strangely enough, Silk twistedly funded the anti-labelling side too). Whole Foods took its sweet ass time sitting on the fence before it was pressured into joining the yes campaign (mostly because Whole Foods can’t guarantee its conventional produce isn’t GMO). Support indy grocers (like Big Carrot and Karma Coop in Toronto) that fight to keep GMOs out. Support some of the pro GMO-labelling organic brands mentioned above. And if you’re not a Californian and can’t vote on Prop 37 on Tuesday, you can still tell your provincial/state/federal politicians you want GMO labelling ASAP. It’s your right to know. And let’s keep our fingers crossed that Californian support doesn’t keep slip sliding away with every big budget ‘say no to prop 37’ ad.