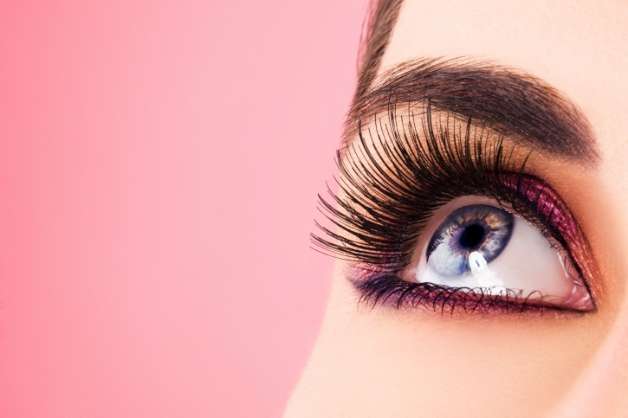 Can someone tell me, when did mascara companies start promising Betty Boop lashes with every stroke? Makeup ads have always pushed jumbo lashes, true, but sometime over the last few years, we’ve started seeing eyelashes on steroids. Like if your lashes don’t look as though they were sliced off the back of a glossy mink and glued to your lids, you’re not a real woman.

No wonder I hear more women whispering about their secret desires to dye/glue/perm their lashes and lash bars keep sprouting up around town. Our cultural swell in ‘great lash’ inadequacy (I know, I’ve had it too) is really just the latest in airbrush-driven insecurities fuelling the rise of the female toxic body burden.

Over the last couple years, the UK’s Advertising Standards Authority has actually smacked down Rimmel and, this past fall, banned a Dior ad because they were applying their mascara to fake lashes. Talk about false advertising. The ASA has also pulled an overly airbrushed foundation ad, anti-wrinkle cream ad and more for similar reasons. Alas, the same ‘bullshit in advertising standards’ have not been applied to most North American glossy mags. Mostly, because here in Canada we have a complaint-driven system and not enough of us have been officially complaining. Though last summer a 14-year old in the U.S. did manage to start a change.org petition that convinced Seventeen magazine to stop with its incessant airbrushing, already.

If these faked, glammed up images just fed our insecurities in order to drive a product’s sales, it would be one thing. But they’re mostly selling products that pump more harmful chemicals into our already overloaded bodies. And when our expectations are so artificially jacked from floating in a sea of unfair images, lots of women will try a natural mascara and say, “Meh, not enough ‘wow factor, sorry.'” I know, I hear it from my friends all the time – especially on the mascara front. When the visual cues we get from ads are so far off from every day realities, hell yeah, a lot of women feel the heat and reach for the big guns – not just mascara that promises false lash effects or 12-hour lipsticks but lash extensions, the lash lifts, the list goes on.

I’m no judge. I’ve been a sucker for some of these promises, too. A newly packaged tube of Organic Wear Natural Lash Boosting Mascara lured me in by promising that”100% saw thicker & longer looking lashes instantly! 94% saw extended & fuller looking lashes after 4 weeks!”

Wow, was this actually a natural lash grower not to feel guilty about? Of course, standing amid ‘Colossal’ ‘Volum Express Falsies Flared’TM wands of ‘Illegal Lengths’ I wanted to ignore the small disclaimer on the box that confessed the stats had, well, no clinical validity: “*Based on individual perception of results of a panel of women wearing Organic Wear Lash Boosting Mascara.”

Based on individual perception. Right.

I’m not telling you to give up makeup. I wear it pretty much every day. I’m just saying let’s all raise our middle fingers towards Madison Avenue – and their false lash effects. We don’t need the added hormone disruptors and ecosystem toxins their drugstore psychology is trying to sell us. Then put your fingers down and take a second look at some of the genuinely natural makeup brands on the market that do a hell of job working with naturally-derived ingredients. I mention some of my favourites in the latest Ecoholic column and even more in Ecoholic Body. You might have to bend just a little on the lash-boosting power but I promise they’ll enhance what nature gave you and deliver way more feel-good factor for your buck.

Oh, and if you want to complain about an ad’s unfair or deceptive advertising tactics, don’t be shy. Call the Competition Bureau: 1-800-348-5358 or fill out an online complaint form here. And get your friends to do the same. All it takes is half a dozen people complaining about the same thing to have an official investigation launched.