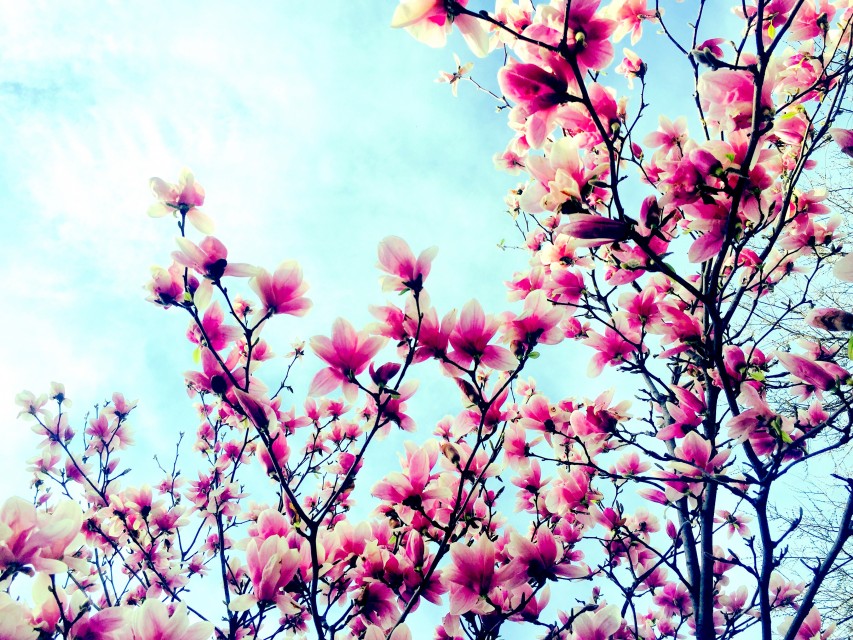 Bursting buds, sweetly singing birds. After a long, dark winter, this is when we’re all supposed to stop, take a deep breath and smell the roses…or the magnolias, since the roses aren’t technically in bloom yet. Thing is, it’s really difficult to smell the subtle scent of magnolia trees while sprinting full speed to catch a bus, run to three meetings and juggle the million things on your to do list. I know. I tried. I got a quick whiff but that was it. The irony of it all is that it was Earth Month. The month when we’re supposed to be celebrating all the beautiful gifts this planet gives to us and to pinky swear that we’re going to take better care of it. It’s also my busiest month of the year. Maybe it was fitting that after slurping back a bowl of soba noodles in four minutes flat and wrapping up three articles on two screens , I darted late to the bus to the subway to catch the first evening of a new mindfulness class. Clearly, I needed this course.

It wasn’t until the subway doors closed that I remembered, shit! I’m supposed to be transferring to a northbound bus, not a subway. Yes, the irony of zoning out in automatic pilot while en route to a mindfulness class was groan-worthy (clearly, the mindfulness class I took three years ago had worn off), but after some initial cursing I had to admit it was pretty funny. There’s got to be a reason those Buddha statues are laughing all the time. Watching humans as we dart around like frenzied circus clowns, missing the point of life entirely would be kind of hilarious, really.

With thirty seconds to spare, I tucked into one of the chairs gathered in a circle around the teacher. Within minutes, we were “stopping and pausing,” tuning into our breath, drawing our attention to the sensations in our bodies, to the room itself, the space between objects, the noises around us, all so our minds could fully “arrive” where we were and, you know, not hover back at the bus stop or half way to work. I’d never felt so arrived in my life. The truth is our minds are almost always at least half a mile and a half day away from the present moment, rehashing the past, fretting about the future, while our bodies motor around on automatic pilot (ahem).

Knowing what you’re doing while you’re doing it with calm, non-judgy awareness is really the crux of mindfulness practice, which has made its way onto the cover of Time magazine, into Fortune 500 boardrooms (read my piece on the rise of corporate mindfulness), as well as into thousands of schools (including McGill medical school), hospitals, veteran’s bureaus, cop stations, you name it. 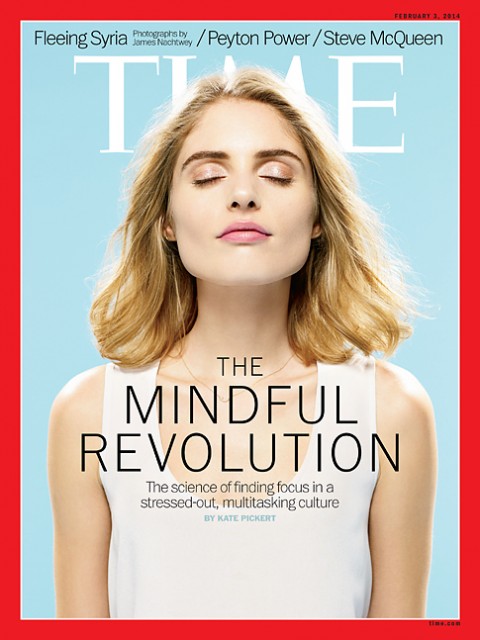 The whole movement got its start in the 70s when Jon Kabat Zinn, a molecular biologist and longtime Zen Buddhist meditator, decided to take the religion out of meditation and the omming out of yoga and apply elements of those practices to a program for patients with chronic stress and diseases at the University of Massachusetts medical school.  Out of that, the 8-week Mindfulness Based Stress Reduction (MBSR) program was born. Now you can sign up for an MBSR class or general mindfulness class pretty much anywhere you live on the planet. If you’re looking for a bootcamp in stress reduction this is it. They not only teach us how to eat, sit, walk and even stand in line (like, say, at the DMV) more mindfully, over the 8 weeks we’re also learning how to slow down and make time for ourselves, how to watch our thoughts and let them go without getting ensnared, and how to make room for new ways of thinking (including one of my faves, “beginner’s mind” – seeing the world around ourselves with perpetually fresh eyes and approach people and things we take for granted with open curiosity). Many of the mindsets are definitely rooted in Buddhism, but without the karma and reincarnation talk. Mostly, we’re training in how to really (I mean really) get present, which takes a while.

By the time the teacher got us lying down for a 45 minute body scan at the end of day one, I thankfully remembered a kernel of deep wisdom from my first mindfulness class three years ago: pee first. That and maybe don’t fill your bladder with two campari sodas right beforehand (it was summer and patio season, come on!).  The teacher guided our attention slowly from our toes up to our hips before I remembered I should really start paying attention. Like I said, knowing what you’re doing while are doing it is really the crux of mindfulness practice. Initially, it’s kind of maddening to try to hone in on the sensation in your right big toe (let alone the toe next to your pinky, who can feel that thing?), but now, four weeks in, the class has given me a grab back of techniques and meditations to quickly get my mind calm and focused. You don’t need to do the whole 45 minute thing. Really, I’ve even done mindful toast buttering and hand washing. Okay, so the toast thing wasn’t that successful but slowly lathering your hands can be weirdly satisfying (just don’t leave the water running endlessly while you get enchanted by the feel of lather on your skin).

Most of all, what I’m loving about the class is that it reminds me to slow down and savour everything, big and small. From a warm shower (courtesy of the Great Lakes! and my hot water heater!), to a cup of tea under my magnolia tree (in full bloom!), to the quiet moments I spend with my handsome but not-so-healthy 20-year old kitty, who’s in the last days of his life here on earth. Yeah, some moments are hard, but I notice I can let those feelings come and go more easily. There’s so much beauty, love and joy all around us that’s there for the taking, hidden in plain sight, we just need to take the time to see it. If Deepak Chopra is right and the highest spiritual state is to be perpetually surprised and astonished at our own experiences, then a mindfulness class can be a pretty quick path to enlightenment.