Scrolling through the constant barrage of bad news in our feeds, most of us tend to react one of two ways: curse a lot more than usual or look for an escape hatch. Surely, there’s got to be an island out there without TVs or Wifi. Or a meditation retreat that doesn’t make you wake up at 4:30 in the morning.

But would sitting cross-legged on a cushion all day in the face of the political shit storm really be the responsible decision? Over the past few months, yoga-heads, mindfulness-junkies and Buddhists continent-wide have been busy grappling with how best to overcome all-consuming Trump-induced fear, angst and dread. In the Donald Trump era, we could all use a bit more deep breathing. No doubt, there’s no better time than the present to sign up for an eight-week mindfulness class, get an unlimited yoga pass or pop by your neighbourhood meditation centre.

Sending love is another big Buddhist tactic. Practicing ‘loving-kindness’ or ‘universal compassion’ for all living beings – including those politicians and voters in other countries you disagree with – is a basic tenet of Buddhism and, really, most religions. Like most humans, Trump, the Buddhists say, suffers from the pretty common delusions of greed, self-cherishing and ignorance, to name a few. He may be taking our societal ails of  to gold-plated heights, but zen teachers will tell you we can’t rage out at him for it without seeing their seeds in our own lives. Still, even spiritual types will find putting Trump in that universal compassion circle of love can be tough. I’m still working on deep breathing through his speeches. Although, I have to admit that sitting in on meditations on compassion while Rob Ford was the notorious crack-smoking mayor of Toronto, guided by a Buddhist teacher to wish happiness to all those we “hated,” did trigger some whacky dreams of me hanging out at the movies eating popcorn with the former mayor. After that, I couldn’t casually say I hated the guy anymore, I just didn’t agree with his politics.
Finding compassion for those people we’d otherwise dismiss as crazy or evil may be key to overcoming the political polarization that’s fed the whole Trump phenomenon, writes Oliver Burkeman, author of The Antidote: Happiness for People Who Can’t Stand Positive Thinking. (Burkeman recommends doing mindfulness meditations observing sensations as they arise in your body while listening to Fox News to flex your skills.) Zen priest Angel Williams Kyodo clarifies that loving everybody doesn’t 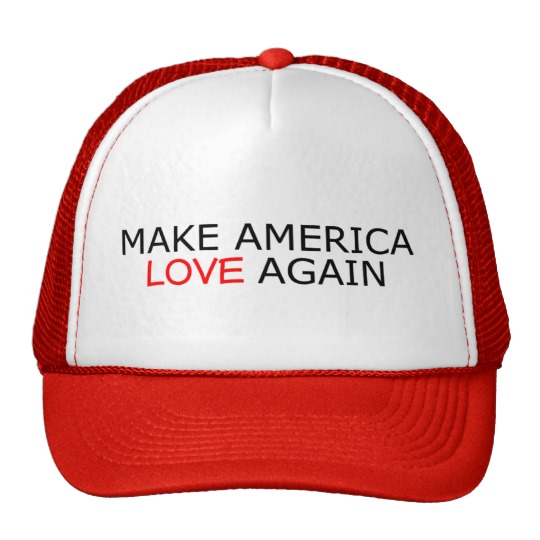 mean you have to like them, or for that matter, support their policies. Regardless, at a recent event on activism and spirituality in New York, Kyodo said, “In social justice work the only option is loving everyone. Otherwise, there is no path to real change.” Kyodo does a lot of work supporting activists by training them in meditation and mindfulness practices. She says,  “Whether we’re leaning toward the spiritual community or the activist community, what we need is the combination of a mind that wants to change the world and a mind that is steady, clear–seeing, and seeks change from a place of love, rather than from a place of anger.”

In an increasingly polarized world, getting stressed out citizens and activists types meditating and getting spirit junkies involved in politics is going to be more important than ever. Which is why more zen types are pushing back against the presumption that places like Buddhist temples or even yoga studios and mindfulness centres should be apolitical.

A day after the inauguration of Donald Trump, busloads of Buddhists did something many of them had never done before – they got off their meditation cushions and joined the Women’s March on Washington as well as solidarity marches across North America. That same day, dozens of temples across the US held public meditations and prayers on inauguration day to “join a collective energy for peace” and “support a more peaceful, compassionate and just world.” The Shambala community in DC even offered free intro to meditation classes. (Trump may be the best recruiting tool they ever had). 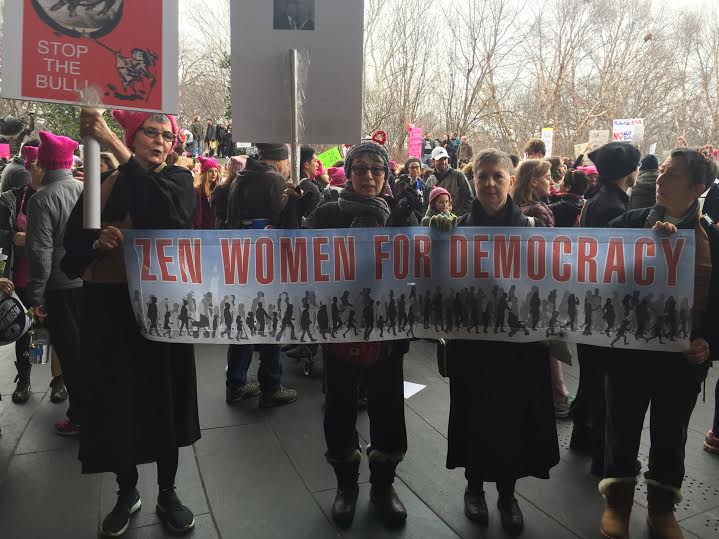 We all need to become, as monk-scholar Bhikku Bodhi urges, “more visible advocates for peace, basic sanity and social justice” – and I’d tack onto that, the planet.

After all, in the global Buddhist playbook, there’s been a range of reactions to political turmoil, from basic meditating for world peace all the way through to the self-immolating Tibetan monks setting themselves ablaze. There’s got to be something in the middle there for everyone.

If there’s a gift in Trump’s victory it’s the rise of a new generation of activism and solidarity across a swelling cross-section of communities – yes, even usually apolitical saffron-robed monks, united in a common cause against hate and greed. As Buddha said, he who holds a hot coal with plans to whip it at someone’s head just ends up burning himself. He’d also say karma will level things out for Trump. And if Buddha were Tweeting today he’d no doubt try to remind us all that #Lovewins.

A version of this article appeared in NOW Magazine.