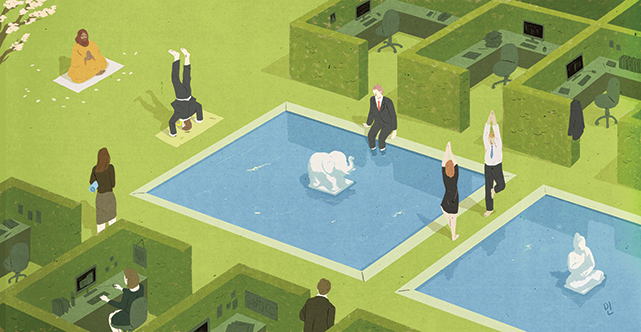 Hey gang, My big piece on mindful corporations in Corporate Knights Magazine is out! Here’s a little teaser.

SAN FRANCISCO – Executives from Google, Facebook and Instagram are all taking turns on a hotel conference room stage sharing business insights with an audience of 2,000. They’re not, as you might expect, clicking through slide shows about user growth or retention rates. Instead, they’re swapping pre-meeting meditation techniques, pausing to “get present” and laying out the benefits of a compassionate workspace.

This is Wisdom 2.0, a conference where meditation gurus and technology leaders converse about living mindfully in the modern world.

At the fifth annual San Francisco symposium, held in mid-February, there’s a lot of onstage and offstage grappling with the disconnecting impacts of our hyper-connectivity. Projected onto large screens are charts on what cellphone addiction is doing to young brains. As an antidote, there are plenty of zoned areas where attendees are invited to “disconnect to reconnect,” including a meditation temple and makeshift yoga studio. There’s even a wood-clad “Camp Grounded” booth where adults can sign up for a digital detox retreat free of devices and work talk. Yes, this is California, long considered the flakiest American state, but media mogul and mindful living advocate Arianna Huffington, founder of Huffington Post, takes the stage to assure the audience that mindful meditation is now mainstream.

She labels 2013 as “the year when CEOs came out not as being gay but as being meditators.” On her list of those out and proud zen leaders: Ray Dalio, founder of Bridgewater, the world’s largest hedge fund company; Marc Benioff, CEO of Salesforce.com, a billion-dollar cloud-based customer management company; and Mark Bertolini, CEO of Aetna, America’s third largest health insurance company. Aetna, by the way, rolled out a trademarked Mindfulness at Work program to its 49,000 employees after having conducted pilot studies demonstrating its stress-reducing, productivity-amping impacts.

The European telecom marketer sitting next to me leans in and confides he’d never really heard of mindfulness before but grew curious when a company as successful as Google was doing it.

So what exactly is the rumoured key to all this corporate success? Mindfulness, at its core, is pretty simple. It’s the practice of bringing a calm, non-judgmental awareness to the present moment. It can be as basic as taking a minute to get quiet and tune into your breath and senses. If there’s an aim to mindfulness it is to carry that tranquil “clear seeing” into your day, every day. (Google, we’re told, does two-minute mindful meditations at the top of every meeting.)

Mindfulness has its roots in Buddhism, though secular mindful meditation techniques recently hit the cover of Time magazine thanks to their rising use as stress reduction tools in North American hospitals, classrooms, veterans bureaus, therapist offices, congressional offices and, yes, boardrooms. Time called it “The Mindful Revolution.”

There’s no doubt it’s permeated business culture. Mindful meditation even made its way into the World Economic Forum in Davos, Switzerland, this past January, with sessions on mindful leadership running parallel to talks on monetary policy, food security and an Iranian nuclear accord.

The question hanging in the air is whether these wisdom practices, as mindfulness and meditation are known, are, at the same time, sparking a more mindful approach all the way down the supply chain, spawning cleaner, more compassionate capitalism.

Read the second half of this article at Corporate Knights!