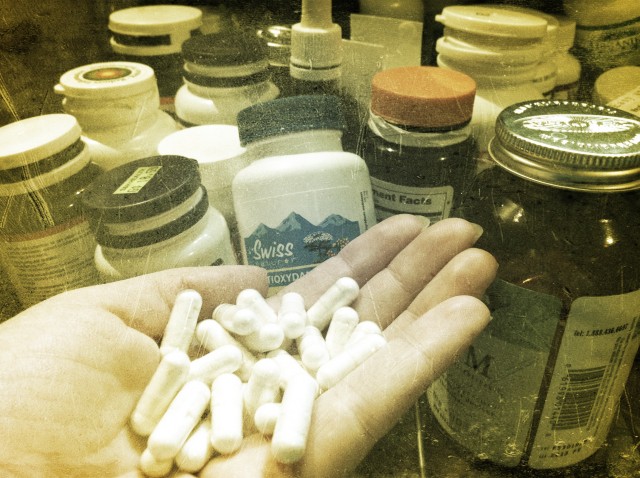 After my article on the hidden toxins in everyday things for NOW’s green issue, I got a lot of reader mail asking me what drugs I was talking about when I mentioned that some pharmaceuticals contained hormone disrupting phthalates and parabens. Figured it was time to expand on the topic with a whole column of it’s own. Thanks to recent study that outed meds that contain dodgy phthalates, I got to name names and mention specific over and behind the counter drugs that contain the stuff. But what really floored me was something we didn’t have room to mention in the column — an earlier documented report of a man that had gotten his body checked for toxins at a Boston fertility clinic because he and his wife were having trouble conceiving. The clinic found his levels of harmful DBP phthalate (a reproductive toxin) were off the charts –  at 17,000 parts per billion when most of our phthalate levels are at about 46ppb. Turns out they traced it back to the DBP phthalates in his Asacol prescription. Asacol now cautions against using the drug during pregnancy, but how many women took the drug while pregnant before that warning was slapped on the medication?

Also, I couldn’t believe that some of the probiotics that I’ve personally taken in the past were listed as containing DEP (diethyl phthalate, a phthalate of lesser concern but still inconclusively tied to lowered sperm counts, etc), even though some of them didn’t mention it on the label. Nature’s Way says that they used to contain trace DEP but I’m still waiting for confirmation on whether they’ve reformulated. Advanced Naturals maintains they’re aqueous enteric coating is totally phthalate-free. All very interesting food for thought. Anyway, here’s that link again to the actual report – click on the tables (1,2,3) if you want to see what meds and supplements tested positive. Off to Montreal/Ottawa/Kingston now for a few days! Be good!