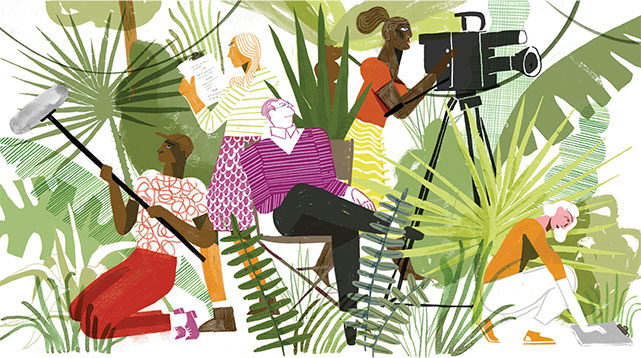 If you’re up on your celebrity gossip, you’ll know Bradley Cooper recently drove to dinner with his ex in a Prius, and Jennifer Lawrence shops at Whole Foods with colourful, reuseable shopping bags. Green living is now par for the course for much of Hollywood (aside from the jet setting and 10,000-square-foot homes), with some of the biggest names in show business championing climate action, wildlife conservation and marine protection. The Leonardo DiCaprio Foundation, for example, is “dedicated to protecting earth’s last wild places,” while Avengers star Mark Ruffalo actively lobbies for renewable energy and protests fracking. Woody Harrelson, meanwhile, co-founded a company that makes paper out of straw waste.

But when the curtain is pulled back, how green is the industry behind the actors? Find out in my feature piece in Corporate Knights summer edition! 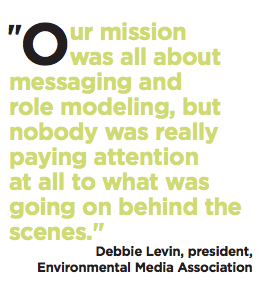 As usual, there was lots that I didn’t have room to squeeze in. Here are some interesting outtakes from my interview with Debbie Levin, head of Hollywood’s Environmental Media Association, who’s been influencing the influencers to go green behind the scenes for decades. She’s the woman who first got Cameron Diaz and DiCaprio into hybrids and put recycling bins on American sitcom sets to “role model” green behaviour. It’s an interesting sneak peak into the celeb side of how celebs have gone. For more on the greening, or lack there of, of the films and television shows themselves, production-wise, check out my Corporate Knights piece. In the meantime here’s some of that phone chat with Debbie…

Debbie Levin: We’ve been working with Toyota going on 16 years. We helped launched the Prius. We got all the celebrities to arrive at award shows in Prius.’ We help them get them. No one got them free. Everyone paid. We pushed them up on those lists, we made the lists hot. We helped paparazzi get shots of them, we helped make the car cool. At that time people were buying Hummers and big gas guzzlers.

How does that trickle down in terms of environmental impact?

I think it’s huge. If you are conscious and you’ve decided to buy a car that you think is cool because it’s a more sustainable choice then you start making more sustainable choices through all of your life. All of sudden you’re not going to go to a market and getting plastic bags because that’s not cool. You’re going to start buying more organic and local food and thinking about your energy use. It informs who you are. I’ve seen it with all of our board members and their friends. Whatever your first step is it becomes the catalyst for everything else that you’re doing and it shifts the way you live. A car is very symbolic especially if you’re in LA. You’re making a statement. Everything else has to follow. That’s why it’s been so great.

Do you think Hollywood’s greening has influenced North American behaviour?

Everybody reads and follows everything people do in Hollywood. It’s usually who’s sleeping with who and who’s wearing what and everyone reads it voraciously. They’re reading blogs, magazines, social media every second, watching gossip shows. What we’re doing is showing is we’re showing the positive, sustainable, healthy lifestyle and making that sexy. It’s role-modelling in the very best way we can. People do follow what celebrities do. If you look at the sale of the Prius or the organic industry or anything that celebrities have embraced you’ll see that it really has had a positive effect.

For more on the footprint of the film industry itself, read the full