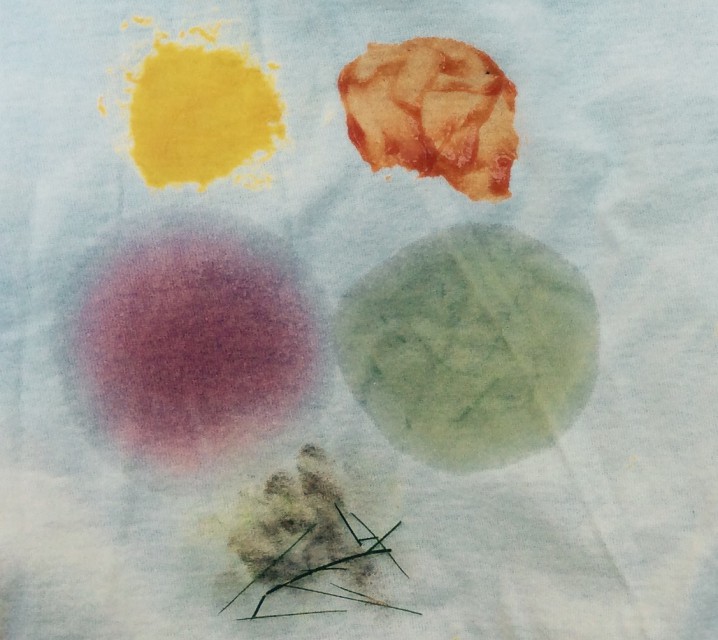 I’m a big-time klutz. My lifelong lack of hand-eye coordination makes me pretty bad at things like baseball, processing physical commands from Zumba instructors and lifting a fork to my mouth without dropping food on my shirt. That last one leads to a lot of defiled clothes, hence this week’s Ecoholic column on stain removers. This is one area where you really need a product to do its job, so as lovely and natural as a stain bar might be, it has to deliver. I also investigated the ingredients in each of them, and things got a bit weird when looking into one of the most popular natural stain removers on the market, Buncha Farmers. But we’ll get to that in a bit….First, to prove that natural stain remedies can work on most of what life throws at you (and your pants), I did what I do best: make a mess! I cut up an old, extra large white T into swatches and proceeded to smear the swatches with red wine, mustard, ketchup and olive oil and ground them into a patch of grass. I let the stains set for 10 minutes to see how they’d fair against fresh stains. To give the stain removers a healthy chance I let them saturate the brightly coloured splotches for an hour before laundering (using the respective company’s laundry detergent, wherever possible). 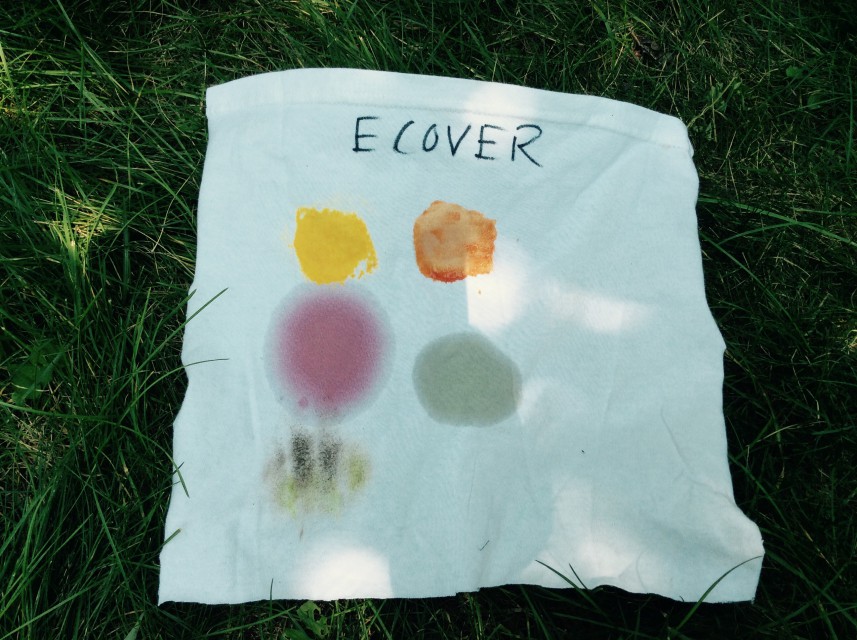 Some faired better than others. Ecover, which is really popular in health stores, failed on most serious stains. It took out the ketchup, sure, but so did most others.  Everything else clung to it like a bad cold. “Mostly gone” isn’t good enough when you spill mustard, oil and wine on, say, a white shirt. 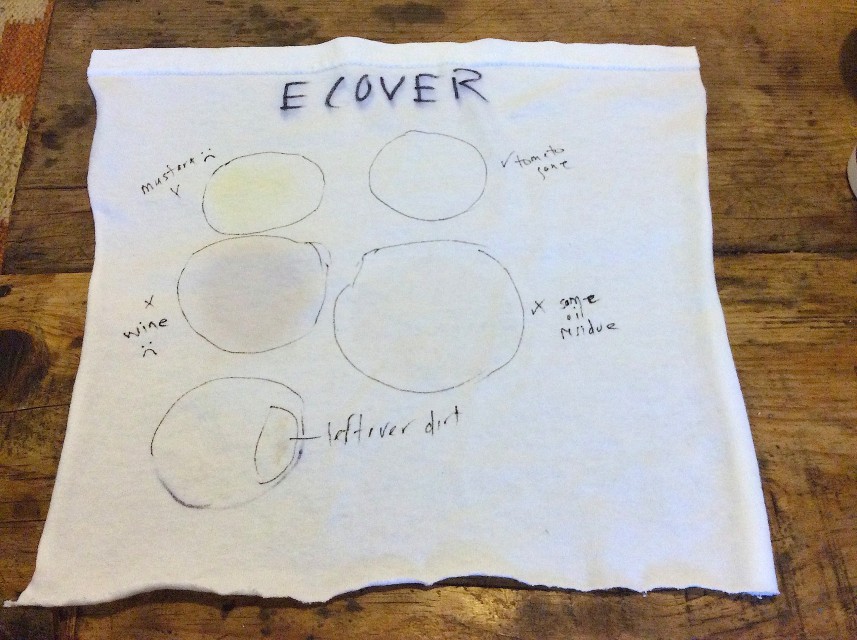 I didn’t include soap nuts in the official NOW column since they’re not marketed as stain removers, but I tested them anyway just to see how soap nut liquid faired. Sad to say it wasn’t pretty. Sorry soap nut lovers! I dig this stuff as a general laundry soap though. 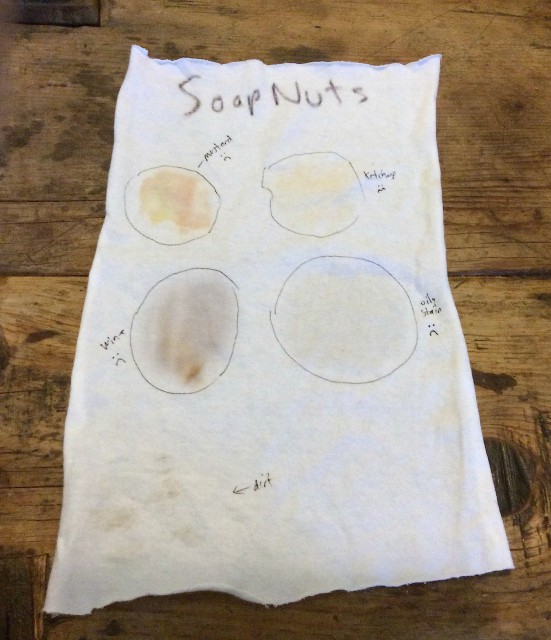 Laundry Tarts Sweet Spot Stain Remover Tube did a pretty good job. Made in Toronto with nothing but saponified coconut oil and canola oil and rosemary extract, it’s really just a soap bar (in aplastic twist stick), though unlike most soap bars on the market it doesn’t contain rainforest destroying palm oil. I didn’t have room for it in my NOW column, but laundry Tarts came in third place overall, since it left a hint of purple behind where the red wine was and left slightly more yellow behind where the mustard was. But the oil and ketchup were gone, as was the grass. I think the ground-in dirt just needed a little help from a scrub brush.

I tried to get my hands on some Seventh Generation stain removing spray but couldn’t find any health store that had any in stock.

The two finalists for best store-bought stain remover were, hands down, Nature Clean Oxy powder and Buncha Farmers. They both eliminated wine, oil, ketchup, grass/dirt as well as blueberry and cranberry juice. Nature Clean left a little mustard residue but did slightly better than Buncha. Of course, these were all fresh stains. So I proceeded to try both on old stains, like an old cat puke blotch Ecover failed to remove (Buncha aced it).  I let them both soak overnight on a stubborn blood stain and Buncha didn’t lift it in the slightest whereas Oxy eliminated 75% of it. Oxy also lifted away 50% of the rust stains on an old shirt but couldn’t finish the job (I’m going to give it a second overnight soak to confirm). Neither worked on ink. 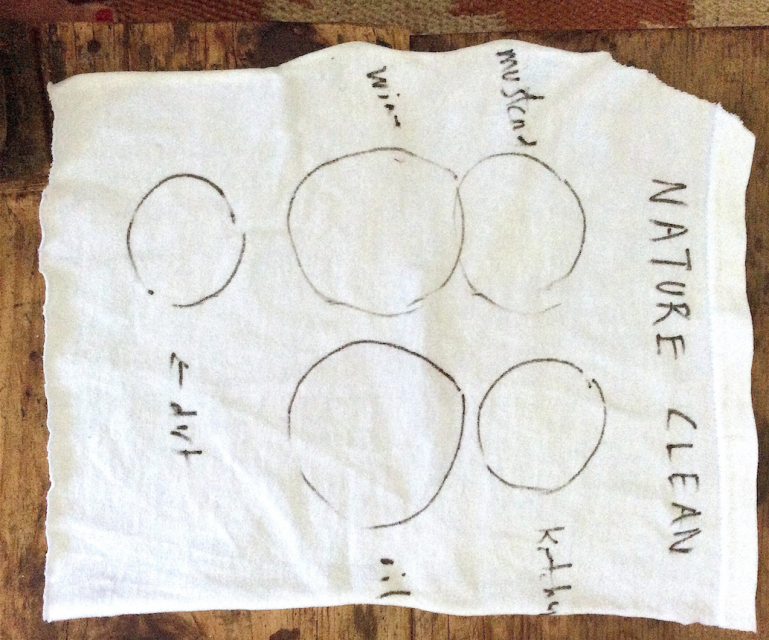 To sit in the winners seat both had to clear my ingredient check. Nature Clean Oxy jumped ahead here. The washing soda in here can be irritating on hands, yes, but the simple ingredients in here still get an A from Environmental Working Group’s healthy cleaning guide (update: Nature Clean Oxy’s latest recipe contains sodium carbonate/washing soda, sodium percarbonate and sodium metasilicate…the sodium metasilicate can cause burns at higher concentrations but not those found here). I don’t always agree with EWG and might demote washing soda to a B for irritation factor (you might want to wear gloves to minimize irritation, especially with frequent use. Though to be honest, because this stain removing powder is really designed to be stirred/dissolved into a bowl of hot water, I just soaked stains in the bowl and didn’t have much direct contact with it like I did with Buncha Farmers. BF requires manually rubbing the soap bar into the stain and the lather became quite drying after a while). Nonetheless, Nature Clean’s Oxy is a lot cleaner than most OxiClean products which have extra fillers and, honestly, OxiClean’s spray cleaners are loaded with crap. But I digress…

Time to look into Buncha Farmers…

This stain stick has a serious cult following and does a good job on most fresh and some old stains, but is Buncha Farmers nontoxic and planet-friendly? Let’s take a closer look. First of all, this stuff contains borax, which has been popular in DIY cleaner recipes (including some of mine) for decades, however, it also gets a big fat F  in EWG’s guide to healthy cleaners thanks to evidence that borax is a reproductive toxin at high exposure levels. The EU ruled that borax is safe at levels found in consumer products like detergent, but still, not everyone’s going to be thrilled about borax’s presence (for more on the borax issue, read on here) Borax aside, Buncha has another problem. It’s always contained palm oil, which is riddled with very serious ecological concerns and labour rights woes (even the “sustainable” kind gets flak from activists). I called Buncha to inquire about their palm oil and was happy to hear from their VP and Sales Director that they had just switched away from palm oil two weeks ago. Great! So what are they using instead? He said lemon oil. Lemon oil? Really? Interesting. Seems like an expensive replacement. I asked him about his canola oil, whether it was conventional or non-GMO, he quickly said “non-GMO.” And when I asked about the percentage of borax in his sticks, he said, very little, “less than .5%,” then went on to tell me they were now sold in 12 countries and were in over 50,000 stores. 50,000? Did I hear that right? Yep. Wow, what a Canadian success story! I still assume I heard wrong so the next day I called back and emailed to confirm my facts before we went to print and this time I got an email from the owner Iggy Natoli. He had some corrections to offer. First off, they’re in maybe 5,000 stores and their canola is conventional, not non-GMO. He said the palm oil is being replaced, yes, but he said it’s being replaced with “vegetable oil.” I inquired about the vegetable oil’s source, since a lot of veggie oil is palm derived. Post publication he responded and said it was soy-based. Suffice it to say, it was pretty weird and confusing to get conflicting ingredient info from the VP and owner and it makes you wonder about the non-GMO promises Buncha may have made to other consumers who called in.

So the big winner in terms of store-bought stain busters was….Nature Clean Oxy. Although my Ecoholic pick of the week was, drumroll please….

DIY STAIN BUSTING HACKS! Admittedly, a lot of home remedies have failed me miserably. Glycerine on mustard was a dud. Vinegar on rusty clothes disappointed. But here are some goodies. 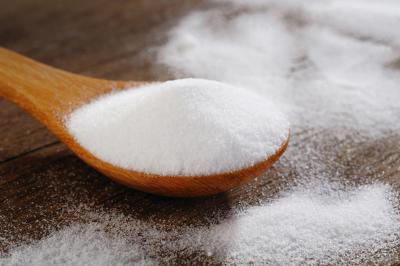 Oil: baking soda and water paste. Simple, and it works.

Blood: soak in hydrogen peroxide for as long as it takes, fresh stains have lifted in half an hour. Note: didn’t work on super old blood stains.

Ink: Removed all evidence of an exploding pen from one of my favourite Jack & Marjorie purses with rubbing alcohol.

Red wine: sometimes salt and soda water work as a pretreatment, sometimes pouring boiling water over the stretched out stain gets it out. Though, honestly, with red wine, I vote for the NC’s Oxy. It removed everything the salt/soda water failed to remove.

DIY Oxy: You can make your own homemade version of Oxy by mixing a couple tablespoons of washing soda with a couple tablespoons of hydrogen peroxide. Update: forgot to mention you can dilute this with some warm water! It’s not quite the same but works on a lot of stains. Like Oxy products, they’re only active for maybe half a day so don’t make a giant jar of this stuff and let it sit around. You can also add a tablespoon of natural dishsoap in the mix to boost your dirt-lifting powers.

My pal Lindsay Coulter, David Suzuki’s Queen of Green has a more extensive chart on DIY solutions for a huge array of stains on clothes, carpeting, countertops, etc. Definitely check it out.

BUT WHAT IF NOTHING GETS IT OUT? THE BIG ECO QUANDARY OF THE DAY

Here’s the thing. Natural stain removers work on a ton of stains, but what happens when they don’t? If your favourite shirt or schnazzy new pair of pants has gotten so deeply and tragically stained that no DIY or natural stain buster will eliminate it, what do you do, particularly if 1) covering the stain up with a patch won’t work on this particular item and 2) you’re not ready to recycle it into a rag? Is it better to use a small spritz of something dodgy like Resolve (which I rated poorly in the column) to prevent said item from being thrown out? I’m pretty torn over this one. And before we continue, I have a confession to make: last time I was at my in-laws, I, sigh, snuck a squirt of their Resolve on my favourite organic T-shirt since none of my natural stain remedies had been able to eliminate a cascading series of giant oil splotches that had set-in rather deeply across the belly of the shirt. Now, keep in mind, I don’t buy a lot of clothing and wear what I do buy for eons, plus organic cotton clothing isn’t cheap so I made one last ditched effort to save my beloved yellow peace feather shirt. Yes, it worked. And yes, I felt dirty about it, so I’m confessing my sins and saying 5 Hail Suzukis in the hopes that cleanses my karma. As I said in the column, all other options should be thoroughly exhausted before you sneak into your brother/mother/neighbour’s house to steal a squirt of this stuff. Or give up and start working on your next rag rug.