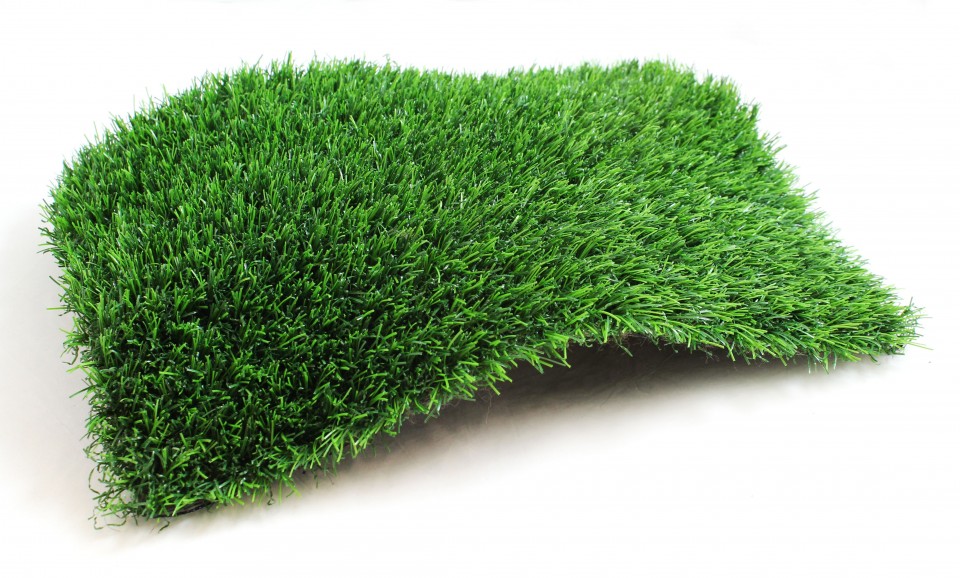 For eons, anyone committed to slapping down an artificial lawn needed pretty thick skin to withstand a regular dose of snickering, arched eyebrows and mumbled insults from passersby. Of course, today’s synthetic grasses have come a long way, aesthetically speaking, since the early days of Astro Turf, and with California’s crippling drought as well as a rise in lawn pesticide bans, artificial grass sales are growing faster than Kentucky bluegrass. They don’t need water or pesticides to stay lush and green, so does that mean they’re, well, green in the David Suzuki sense of the word? Time to weigh the pros and cons.

√ NEVER USE A SPRINKLER AGAIN. The typical suburban lawn sucks back 10,000 gallons of water above and beyond rainwater each year, according to the U.S. Environmental Protection Agency.  Install an artificial lawn and you’ll never have to worry about your lawn going brown, which is why these are becoming to dang popular in California. Though word is owners have been known to hose them down when their plastic lawns starts to overheat, as some can (particularly those with recycled tire crumbs). Also, if your dog poops on it, you probably want to rinse it off after you scoop. Otherwise, things could get smelly quickly. Plastic doesn’t really support the biodegradation process the way natural grasses and soil do.

√ GOODBYE WEED PULLING, SO LONG ROUNDUP. If you don’t live in area with a ban on lawn pesticides, then who knows what hazardous toxins Bill the neighbour is spraying on his side of the fence. This is particularly worrisome now that the World Health Organization says the world’s most popular weed killer, glyphosate (the main ingredient in Roundup) “probably” causes cancer in humans. At least if Bill’s got artificial turf, this worry goes out the window. Plus, you’ll never see another dandelion or grub takeover your lawn again (though you will miss out on homegrown dandelion salads).

√ NO LAWN MOWING NECESSARY. It’s one thing if you mow your lawn with a manual mower or even the plug-in kind, but gas mowers are seriously air polluting.  Environment Canada says an old gas mower can churn out over 100 pounds of greenhouse gases in one season.

√ IT’S NOT MADE WITH THE SAME CONTROVERSIAL STUFF USED ON SOCCER FIELDS (MOSTLY). If you’ve heard concerns about heavy metals and other contaminants lacing soccer fields and playgrounds, that’s all tied to the recycled tire crumb infill used to make artificial turf more shock-absorbing. The controversy made headlines when Seattle-based college soccer coach Amy Griffin went public with her concerns about cancer incidents amongst soccer goalies that have a lot of direct contact with those crumbs. The good news is that most residential artificial lawns are no longer made using recycled tire crumb infill. Some still offer it as an option, but companies tell me it’s, surprise, increasingly unpopular. They recommend using sand as infill instead to help weight plastic grass down (yes, you can expect sand to be dragged into your house).

PLASTIC ISN’T REALLY GREEN (REGARDLESS OF ITS COLOUR). You can’t get away from the fact that synthetic lawns are made with non-renewable petroleum-derived virgin plastic – not a particularly sustainable material, to say the least. Most are made of polyethylene, polypropylene and/or nylon and backed with polyurethane. One company says it mixes in some soybean oil-based plastics but it doesn’t disclose exactly what percentage of that their lawns are actually soybean-based. While there’s been some research on chemical leaching and offgassing from tire crumb-infilled turf, research is lacking on whether crumb-free, plastic lawns release any contaminants into water or air.

FAKE LAWNS CAN’T CLEAN THE AIR. No matter how amazing synthetic lawns are for your water bills they just can’t compete with nature when it comes to photosynthesis. Natural grasses absorb carbon dioxide from the air and kindly release clean, fresh oxygen for us all to breath. If we were to replace all North American lawns with

THE EARLY BIRD WON’T GET THE WORM. Conservations aren’t thrilled about the habitat loss that comes along with stripping out your old lawn/garden and replacing it with plastic turf. Birds can’t dig for worms and artificial turf provides zero habitat for all sorts of beneficial insects. Joy Wallis of the Dorset Wildlife Trust told The Telegraph, “An increase in the use of artificial grass will just add to the decline of wildlife.”

FEELING HOT, HOT, HOT. Natural grass can have a cooling effect on the air. Not so for plastic. In fact, some jurisdictions have expressed concerns it could contribute to what’s known as the urban heat island effect. It already happens in cities full of concrete and black roofs. Tearing out lawns and putting in plastic grass won’t help matters. And any turf with black tire crumb infill is famous for getting up to 60 degrees hotter than natural grass. Just ask the players at the Women’s World Cup what they think of this.

RAIN, RAIN, SLIPS AWAY. Artificial grass companies say you don’t have to worry about rain runoff since they perforate their lawns so that the rain seeps through down to the soil underneath. However, concerns remain that the compacted earth underneath lacks natural plant roots that help funnel the water underground. If that rain runs off your soil into the streets, well, you’re contributing to water-polluting storm sewer overflows.

IT HURTS (ACCORDING TO SOCCER PLAYERS): Have you seen the Tweets from soccer players at the Women’s World Cup complaining about the rug burn and injuries from playing on artificial turf. Okay, so a study released last year said there’s no statistically significant increase in injury risk from playing on fake turf, but clearly pro players aren’t convinced.

If you’re really committed to grass, try planting native grasses like ryes and fescues instead. They’re naturally drought resistant and grew on these lands long before anyone came along with a sprinkler. Ask about them at your local garden centre.